This week, I traveled across the country to share Redgate’s journey so far with team autonomy at the Agile Manchester conference. It was a great conference; friendly people, valuable sessions, inspiring speakers and a brilliant venue.

The talk I gave with m’colleague, Elizabeth, was on the first day of the conference and it seemed to go well. We spoke to about 45 people, so not the busiest room ever but not a vacuum. People seemed engaged, they laughed in most of the right places and we got some positive comments afterwards. Phew.

Loads of great insights from @cj_smithy and @ElizAyer about developing team autonomy at Redgate. Thanks for using the transparency of this jellyfish! pic.twitter.com/TkmuEmEDsk

As our talk was on the first day, the pressure and anxiety on this nervous speaker was quickly lifted, leaving behind it relief and a glow of achievement. Allowing me to focus on and enjoy the rest of the conference. As ever with these events, whilst sitting through a string of seemingly unrelated sessions, I start to find interesting connections linking one presentation to another and an underlying theme or aha moment of the conference crystallizes.

In previous conferences, I’ve discovered these themes around the importance of continuous delivery, a need to embrace coaching techniques and the realization of how crucial team autonomy is. When finally identified, these themes always seemed to be something I instinctively believed already, but had somehow not resonated with me or I had lost sight of them in the blizzard of daily working life.

At Agile Manchester 2018, my takeaway theme was “The most important thing is explaining The Why”. Ironically, this personal conference zeitgeist was best captured in the slidedeck I bought with me to Manchester to present. It wasn’t in my slides, but in the accompanying slides that Elizabeth had contributed to our deck. They contained a link to a video that I had heard of but had never watched – Simon Sinek’s TED talk about how great leaders inspire action.

But before we get to that, let’s rewind a bit and walk through some of my highlights from the conference…

Beyond Budgeting – business agility in practice, by Bjarte Bogness

The conference opened with Bjarte’s wide-ranging keynote about business agility. In his session, he questioned the sense of an annual budget in the face of today’s expectations of dynamic business plans, agility and speed of response. Painting it as an archaic approach best suited to companies 100 years ago and arguing that a year’s ‘batch size’ is too big. What we need is continuous delivery of resources. In fact, meeting your annual budget should not be considered a success in itself, he argued; the budget is likely to have constrained your ability to meet the real company goals.

He contrasted those who want to run businesses in a command and control fashion (Theory X people), who feel the budget gives them a (misplaced) feeling of control, and those who want to create an intrinsically motivating workplace where people have the freedom to act and where a clear purpose is supported by transparency, clear organisational values and a sense of belonging.

Statoil (Bjarte’s employer) have radically and successfully applied a fully transparent approach to employee expenses, opening up what everyone has spent so everyone else can see it. Yes, Bjarte says, someone will occasionally do something bad and take advantage of that trust, but it doesn’t mean you were wrong to trust. You don’t put everyone in jail just because one person commits a crime.

It is all just common sense, noted Bjarte modestly mid-way through the session. Well, as the saying goes, common sense is not all that common.

The session was spectacularly good and tapped into my fundamental beliefs about the power of great teams in an open, empowered environment. My theme of The Why was represented here by Bjarte’s assertion that a key leadership principle was to create a sense of purpose. He said “Engage and inspire people around a bold and noble cause, not around short-term financial targets”.

Using OKRs: what I wish we’d know when we started by Neil Vass

Neil’s sessions appealed to me because we’ve been using OKRs at Redgate for over 18 months now, and whilst they have helped us improve how teams focus, they have been difficult to get right and have proved laborious for the teams.

Hearing Neil’s description of OKRs, why and how they rolled them out in his corner of the BBC was a nice reminder of the benefits we are aiming for. Hearing their troubles with Key Results and the time it took to set OKRs the first time they tried, normalised our experiences and made me feel a bit better about our efforts. We’ve been trying to apply these to 9 teams, let alone 1, so it’s no wonder we’ve found it hard!

Values in the workplace by Tobias Mayer

Day two’s keynote was as impactful as Bjarte’s on day one, but on a much more personal level. Tobias started by asking us all to move the 200 or so chairs in the room to the side and gather around, which certainly jolted everyone awake; “crap, I’m going to have to talk to someone”. But the icebreaker was pretty natural and set the mood for the rest of the hour.

Tobias talked about how many, many companies call out a set of values or a mission statement appearing to codify the principles that underpin the organisation. Many of those companies then fail to follow those values in their day-today operation, rendering them useless or, worse, disingenuous.

He then moved on to ask us to think about our own personal values; what principles do we hold most dear in our approach to working life. In the couple of minutes we had to think about that I came up with these; Be honest AND respectful, grow others, be deliberate. The real kicker was that Tobias then asked us to share a time where we had not lived up to those values yesterday! This was an all too easy task and made me think twice about being so scornful about the companies that stray from their own “values”.

In his call to action, Tobias encouraged us to think about why we do what we do; to deliberately call that out and then think about what concrete things we will do to move closed to those ideals. Inspiring stuff.

Growing or distributing teams? Think like open-source by Paul Shannon

Paul bravely battled through some crazy AV issues (“I’ve just pushed the connector through the wall”) to tell us about how his company eLife are using as open-source approach to develop their scientific publishing and hosting software. Amongst some great tips for distributed team working, Paul talked about the inspirational purpose that eLife has, the why they do what they do, “Our mission is to help scientists accelerate discovery by operating a platform for research communication that encourages and recognises the most responsible behaviours in science”. This stood-out to me when I later watched Sinek’s TED talk.

Transforming to a product engineering culture: what it is and how far have we got? By David Halsey and Sully Rafiq

David and Sully from MoneySupermarket.com spoke about their move from a team structure set-up to complete a large-scale platform rebuild towards an ongoing product team approach. They told us about the Car Insurance team who have been piloting this change in approach to significant effect.

This session was great as Moneysupermarket are trying to do many of the same things that we are trying to do at Redgate; create more autonomous teams, give clear purpose, bake quality in, use OKRs to focus on outcomes, etc etc. It was a bit like looking at a presentation we could be giving –  except they were much more deliberate and clear about what they wanted to achieve with this move, whereas I feel we have lost sight of how positive our endeavors to create empowered teams with freedom to act is. 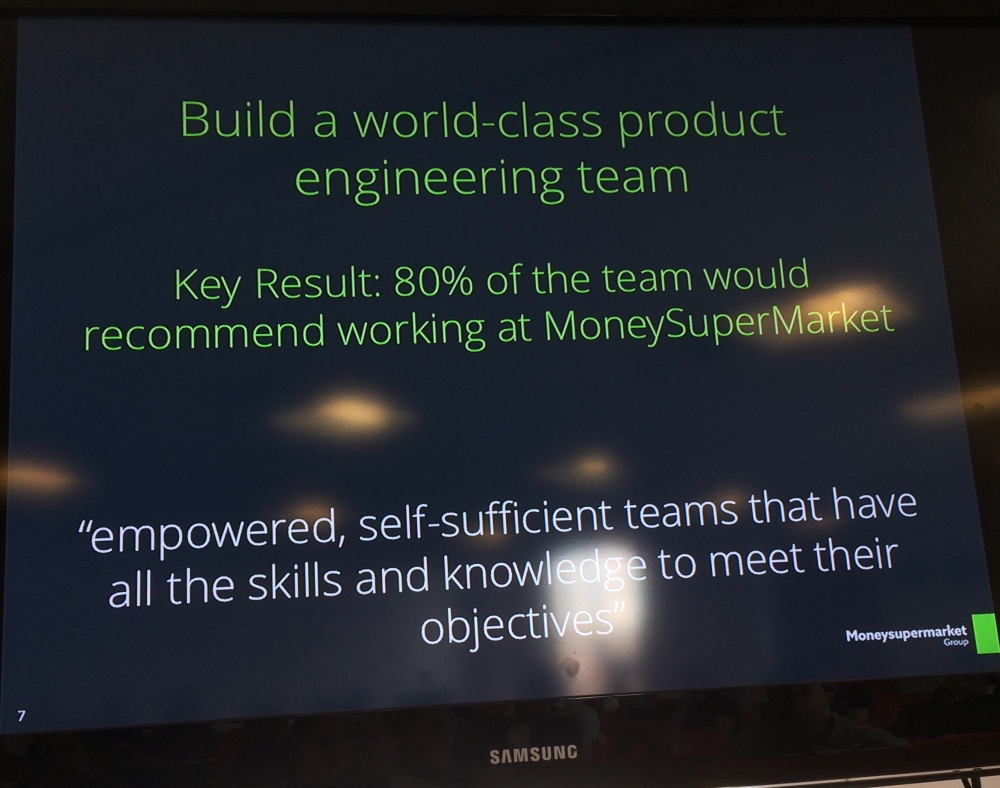 Moneysupermarket used similar material to Redgate as inspiration for their move – like Dan Pink’s Drive. However, their slides were a catalyst for me to go and read more about Google’s Project Aristotle and psychological safety. We should definitely reflect more on those subjects at Redgate. It was here that Simon Sinek’s TED talk was referenced again – as it had been in Elizabeth’s slides in out talk. So, I decided to skip the next session and watch the video.

I found Simon’s talk incredibly inspirational; as I’m keen to improve how I lead in my role at Redgate. He explains how great leaders motivate and enact change by stating their beliefs initially, rather than what they are going to do (which is the norm for ‘other’ leaders). By stating their beliefs, people are able to understand why they do what they do and, if those people share these beliefs, then they may take the leaders cause as their own. “People don’t buy what you do, they buy why you do it”, repeats Sinek metronomically.

The video also tied together what I have seen in my daily work; that the most important thing, when leading and motivating people, teams and the division, is for them to understand why they are doing what they are doing. Why is it important do this piece of work over another, why we do stand-ups, why use OKRs, why a push for autonomous teams is the right thing to do. And these whys need to be the real, fundamental, transparent whys, not the “because we said so” opaque kind.

More personally, I realized that many people will see what I do in my role and maybe even how I do it, but not always understand why I do it. They are surely unaware of the beliefs about software development that drive me to do those things. In fact, although I have an inkling what my driving beliefs are, I certainly have not articulated those clearly, even to myself. Yet. I have some serious homework to do.

So, those are some of my highlights from an enjoyable 3 days in Manchester, the most important of those is “The Why”.

Chris is a Head of Product Delivery at Redgate, a purveyor of ingeniously simple software tools and services. His job is to lead software development teams, helping them to solve their own problems and do the best work of their lives. View all posts by Chris Smith